DJI Mavic Mini, the drone to take everywhere with you

By: Drone Expert
In: Drones With Cameras
Tagged: DJI Mavic Mini
With: 0 Comments

We have with us the new Mavic Mini drone from DJI since a little week. We haven’t lost it and have been able to do a first try in different environments.

Now it’s official, DJI has just announced its new drone, the Mavic Mini, for the general public but above all, it’s super small and light. Folded, it weighs only 249g, a little less than 30g more than an iPhone 11 Pro Max for example. We’ve had it with us for a week now and as you can imagine, it can be carried everywhere.

The DJI Mavic Mini, a small and lightweigth complete drone

One of the surprising things about the Mavic Mini DJI is that it’s so small to hold. Folded up, it fits in the hand and seen from above, it’s the size of a smartphone. Unfolded, like its big brothers, it’s barely bigger. The propellers are not super big and we will especially note that they are wider compared to their size and compared to what we saw previously with the DJI Spark.

Moreover, to continue the comparison with the DJI Spark, the Mavic Mini comes with a WiFi radio remote control. The range is 2km according to DJI with the video return. In distance in length, I arrived at 1.7km before the alerts became insistent. Same for the height where passed 100m, the disconnection alerts become more insistent. Note that I tested it mainly in the United States with a slightly different legislation than in France. Note that this is still WiFi with its limitations.

Coming back to the Mavic Mini, with the cable that connects the smartphone to the radio remote control, the connection was instantaneous. For the regulars of DJI drones, nothing new except the new DJI Fly application, but we’ll come back to that a little later. The drone is launched via a virtual button on the smartphone, no shortcut on the controller like the Mavic Pro or Mavic 2. Once launched, we continue with the surprises since the drone was rather silent, at least outdoors. It is already far from the era of the DJI Spark. But apart from the noise, the radio remote control piloting is quite classic, no surprises on this side. It should be noted, however, that the options are mainly via the DJI Fly application.

As for the DJI Fly application, it obviously uses a user interface similar to what we already knew with DJI GO 4, but simplified. While there are many pre-programmed flight modes, there are not all the options that you can have with the Mavic Pro or Mavic 2. If you can switch between different flight modes to have more speed or more controls, there is no tracking of subjects outside of pre-programmed modes for example. During these first tests, we were at the seaside and there was quite a bit of wind. In spite of the wind that made the Mavic Mini tilt slightly, the stabilized nacelle came out with honors. The photos and videos in exit were perfectly straight.

With the Fly More pack, you’ll be entitled to three batteries and each battery easily lasts 25 minutes in our first tests. So, having more than an hour of battery life for those who take the Fly More pack is huge for a drone, it leaves time to fly and redo the plans if necessary.

(17297)
$599.00 (as of January 30, 2023 01:47 GMT +00:00 - More infoProduct prices and availability are accurate as of the date/time indicated and are subject to change. Any price and availability information displayed on [relevant Amazon Site(s), as applicable] at the time of purchase will apply to the purchase of this product.) 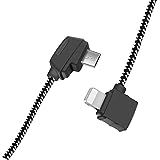 (13)
$7.98 (as of January 30, 2023 01:47 GMT +00:00 - More infoProduct prices and availability are accurate as of the date/time indicated and are subject to change. Any price and availability information displayed on [relevant Amazon Site(s), as applicable] at the time of purchase will apply to the purchase of this product.)